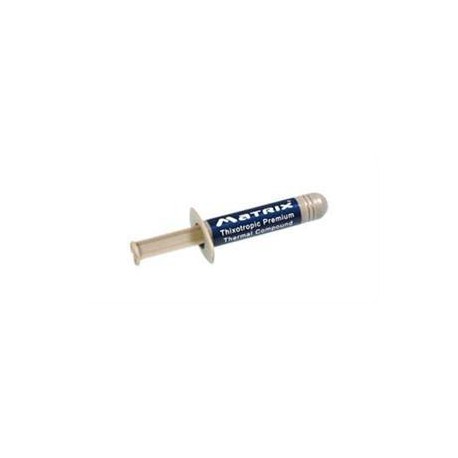 Developed in conjunction with TIM Consultants and based on their acclaimed 0098 grease, Matrix Thixotropic Premium Thermal Compound offers optimum performance in demanding moderate to large bond line situations. It is designed for a wide range of applications between modern high-power CPUs and GPUs and high-performance heatsinks or water-cooling solutions.

Performance:
2 to 12 degrees Celsius lower CPU full load core temperatures than standard thermal compounds or thermal pads when measured with a calibrated thermal diode imbedded in the hottest section of the CPU core.

Break-In Period:
Due to the unique carrier fluid used and the shapes and sizes of the thermally conductive particles in Matrix, it will take a minimum of 300 hours and multiple thermal cycles to achieve maximum particle to particle thermal conduction and for the heatsink to CPU interface to reach maximum conductivity. (This period will be longer in a system without a fan on the heatsink.) On systems measuring actual internal core temperatures via the CPU's internal diode, the measured temperature will often drop significantly over this "break-in" period. This break-in will occur during the normal use of the computer as long as the computer is turned off from time to time and the interface is allowed to cool to room temperature. Once the break-in is complete, the computer can be left on if desired.